Lord of the Scandshar Illustrious Menagerie of Peacocks

Unseen and unknown, Lord Oculus is a major player in the Illustrious Menagerie of Peacocks. The head of operations in Scandshar, Lord Oculus is rarely seen by underlings, which gives rise to many rumors. Some claim he is, as his name suggests, almost inhumanly beautiful, while others say it is ironic and he is hideously ugly. He has been claimed to be a lich, a mind flayer, a beholder, a gnoll, a vampire, the heir to fallen Nerath, and most shocking of all, a common businessman and crime lord. Most suggest he is high in the hierarchy of the Illustrious Menagerie of Peacocks, while some claim he is the Esteemed and Omniscient Peacock Lord himself. That seems relatively unlikely.

Whatever the case, Lord Oculus has taken a direct interest in the affairs of the Shields of the Sorrowfell, although whether he sees them as a threat or a potential tool is not clear.

Sadly for Lord Oculus, that direct interest would be his undoing. When he decided to confront the Shields of the Sorrowfell directly, they slew him and his henchmen in mortal combat.

During the fight, Lord Oculus was revealed to be an Eye of Flame beholder. His long-term goals are unclear, but they most assuredly could not have been good. Now that he’s dead, the extent of his plans is unknown.

Also, for the record, he was evidently called “Lord Oculus the Beautiful” because beauty is in the eye of the beholder.

Image retrieved from http://forgottenrealms.wikia.com/wiki/Eye_of_flame on January 22, 2013. 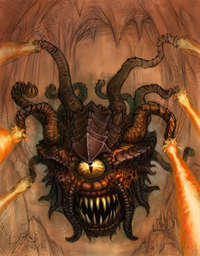