Ghostly Engineer of the Sentinel

James Morgan’s last clear memory is Earth, 2286 CE. Part of the engineering crew of the Sentinel, a prototype multigenerational vessel built to rival the Warden, the Sentinel was constructed with one addition made to handle a glaring design flaw in the Warden — it was equipped with an Autonomous Intelligence. As such, in the unlikely event of catastrophe, the Sentinel could still be safely piloted without a trained human crew. It was sent for a ten-year test mission.

Now, James finds he has died, but that he is still tied to the hulk of the Sentinel. Some catastrophe caused the Sentinel to crash-land on a planet very much unlike his own. What has happened? Why is the ship’s computer full of sarcasm and threats?

Can James Morgan solve the mystery of the Sentinel? 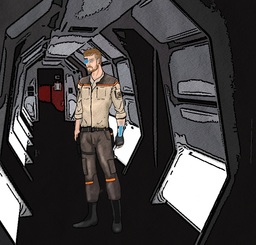