Although Peren speaks little of his past, bits and pieces come out because escaped slaves tend not to go unnoticed. Torinn, however, is an enigma.

He has previously made reference to his “tribe,” suggesting that he was part of a nomadic tribe of dragonborn, but no one can say. His story picks up in Scandshar, as a young enforcer with the Illustrious Menagerie of Peacocks. He met Peren in that line of work, and the two were well-respected.

But they left the underworld for the mercenary life. While hunting goblins in Dawnslight, Torinn met Bosabrieln and Emma, with whom he would form the Shields of the Sorrowfell. 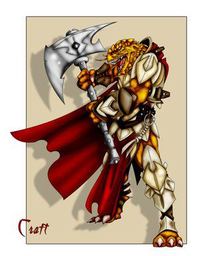