Torili is a dwarf shaman — an urban shaman, obviously, to hang around Scandshar — who has thrown in with the Illustrious Menagerie of Peacocks. Admittedly, the motives are unclear. Perhaps the city-spirits identify strongly with the Menagerie Peacocks, or perhaps Torili simply recognizes a handy alliance when one presents itself.

Whatever the case, Torili is well-connected, and likely has some nebulous role in the Menagerie’s hierarchy. In fact, old Two-Spirit holds an occasional primero night frequented by the city’s elite, and so has gathered even more favor with the nobility and gangsters of the city.

Torili is said to identify as female for mystical reasons, bringing her in line with the animistic traditions of two-spirits. Persistent rumor suggests that Torili’s bodyguard, Balror Baridukr — better known as Backward Balror because he’s a contrary — is in a sexual relationship with Torili, but these rumors are unsubstantiated. Although nobody would probably care either way.

Given her potent spirit-talking abilities (and crime connections), most people forgive Torili her eccentricities and allow her to go about her business.

Image retrieved from http://www.gaycities.com/outthere/19616/a-drag-race-christmas-latrice-royale/ on April 29, 2012. Pigment alteration by wildechilde. 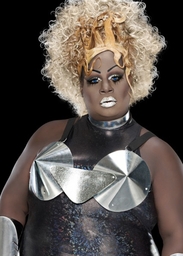