The Sentinel Electronic Nervous System and Engineered Intelligence, more commonly called the SENSEI, is an Autonomous Intelligence made by Elmore Station to help run the multigenerational ship known as the Sentinel. In the event of catastrophic failure, the SENSEI can even completely pilot and operate the ship.

Of course, things rarely go as planned. On the maiden voyage in 2286 CE, the Sentinel was drawn into a Convergence — the SENSEI and crew would better understand it was a “wormhole” — which apparently shunted the craft through the Far Realm and into the Sorrowfell Plains. Originally on a collision course with Duchy Jepson, a party of adventurers (featuring future University Headmaster Ebenezer Cascata) managed to deflect the craft into the nearby Hoarfrost Ridge, forming a crater that would eventually give rise to the Black Moor.

During this time, the Sentinel was buried in rubble, leaving a damaged and tainted SENSEI in control of the ship. Assuming terrorist sabotage, SENSEI began acting incredibly erratically before finally being rebooted by the Shields of the Sorrowfell. 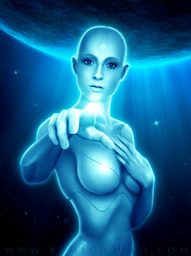