Just how terrible is he?

There are lots of stories about the Terrible Old Man. Some claim that he is simply an old man. Others claim he is a retired adventurer of unknown profession (some even claim that his tangled mass of hair hides the horns of the supposedly dead Baarziduul the Valorous, making him not a man at all, but a tiefling). Some claim that all realms have a Terrible Old Man, and that this is merely one incarnation. Still others claim he is not mortal at all, but the seemingly benign avatar of some cruel god from a distant realm.

Whatever the case, the Terrible Old Man lives in a crumbling hut in the Black Moor. According to travelers, he is not as terrible as his name suggests — he offers tea to travelers from old, cracked china; he offers spare beds to weary adventurers; and he even runs a general store, selling supplies, ritual components, and healing potions to those who need them.

Oh no. He is not terrible for these reasons. He is terrible due to the power he wields, and the objects he carries.

Who knows? Perhaps you might get lucky by making a deal with the Terrible Old Man.

Then again, perhaps you won’t.

It bears noting that most scholars believe the Old Man himself does not know which items are cursed. It keeps him honest.

You can also read further information on the Terrible Old Man. 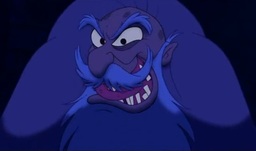