Do you need something? Shaitan al-Ayyim, the so-called “Queer Fakir,” has it. Or knows where to get it.

You could have it, too. For a price.

Supposedly, the old merchant comes from the islands to the West, and according to tales, left a life of nomadic trading with his tribe for the high life of a merchant in the big city.

He doesn’t have any particular status in the hierarchy of the Peacocks, but he is definitely connected. Crossing him is probably an exceedingly bad idea.

Sages are always puzzled by his nickname, which suggests he is a mystic ascetic (or a homosexual, again depending on the storyteller). The most likely idea is that somebody used “queer fakir” as some manner of ethnic slur, and the name stuck.

Even though he seems to enjoy the nickname, it’s highly likely that the person who coined the term is no longer with us. 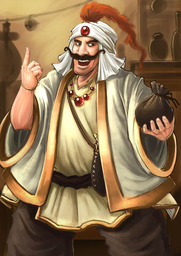