Scruffy is a bit of a cipher. The Shields of the Sorrowfell met him in the Silver Tankard in Sigil, apparently acting as the janitor. However, the context in which he left suggests that he never worked there in the first place; he just picked up a mop and started cleaning.

The way he handles himself in combat, as well as his knowledge of poisons outside of combat, suggests that he might be an assassin, possibly of the Red Scale Guild (or whatever equivalent exists from wherever he originates). Given his strange demeanor, it’s hard to tell — he might just be handy with a mop and have a penchant for mixing toxic substances that would wrack even a dwarf’s hardy constitution.

Whatever the case, it is clear that he is a very efficient janitor.

He left after the Shields rescued Rrowthar, begging the question — what business would a master assassin (or master janitor) have in the Sorrowfell Plains?

Image retrieved from http://theinfosphere.org/File:Scruffy_promo.jpg on March 16, 2014. 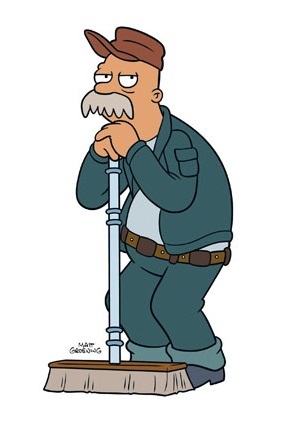