Peren speaks little of his past, but anecdotal evidence suggests that he was a slave in Scandshar, likely a gladiator.

Whatever the case, Peren eventually came to work for the Illustrious Menagerie of Peacocks, most likely as part of the terms of his freedom. In their employ, he met Torinn and the pair acted as enforcers until they decided to seek their fortunes elsewhere.

Finding themselves in the small town of Dawnslight, Peren met Bosabrieln and Emma, with whom he would eventually form the Shields of the Sorrowfell. 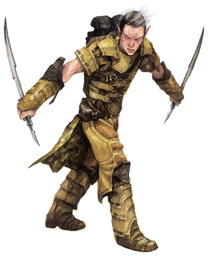