Leogold Spiritforged, like Emma, was an acolyte at the Temple of Light in Jepson. When the old priest of Dawnslight, Xyratris Falconsflight, passed away, Emma and her friend Bosabrieln escorted Leogold to Dawnslight so he could begin performing his priestly duties at the Temple of the Golden Harvest.

When Bosabrieln and Emma left Dawnslight with their new associates Peren and Torinn, it was Leogold who set out after them about a day later once he learned of their destination. Fortunately, he came upon them in the nick of time, as they were beset by orc mercenaries. Between Leogold and the timely intervention of an unknown goblin, they managed to kill the orcs and flee Kiris Dahn. Though Emma died in the battle, the Platinum Claws were able to revive her once the group returned to Dawnslight.

Presumably, Leogold remains there, tending to his flock of miners and farmers beneath the looming Bloodstone Crags.

Image retrieved from http://www.roleplaymarket.com/template.aspx?topicID=26694 on November 15, 2011. 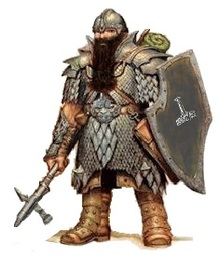