Once upon a time, there was a little pixie who lived in the Feywild.

He was very happy.

But then, something happened that made the little pixie mad. He lashed out, he acted in anger. Anger subsided, but the consequences remained. Things happen in the darkness when people are desperate, and sometimes, angry little pixies just trade one master for another.

Large LeFarge is a street boss among the Illustrious Menagerie of Peacocks, and is one of the most feared street bosses around. Despite his small stature, Large LeFarge is legendary for his violence and personal battle prowess. Those who displease him end up dead or as mutilated freaks. Either way, the message is usually made just public enough so that no one touches him.

Of course, that was how things were. They are no longer that way. The Shields of the Sorrowfell clashed with him, and the pixie died, his body cast into the river so he cannot be resurrected. 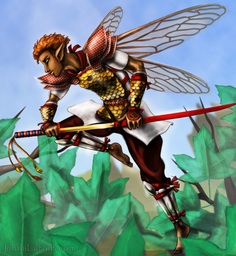