For untold ages, you protected and ruled the fairies of the glade, as their grim and ancient autumnal lady. It was fall when the darkness came to your grove — an itinerant sorcerer, a corruption of the earth. Your sacred grove is not dead, but changed — terrible, malevolent, and alien. You undertook a quest for it to be saved — a quest for the legendary Sammas, the vessel that would purify the land of your home.

Your journey took you north, to the elven city of En’amanisrahd. They recognized your nobility — House Dwin’altin — and issuing a retinue of elves to escort you, informed you that the Sammas was to be found in the lands of men to the north. They told you to consult the libraries of Duchy Jepson, and take your journey from there. You agreed to send word every few weeks, in case horror befell your quest.

The libraries of Duchy Jepson suggested the Sammas lay in the mountains to the north, and so you took your leave, preparing for your long journey.

The quest was doomed from the start.

You met the Old Man in the swamp hidden in the mountains, a marsh of strange creatures and vicious bandits. The Old Man told you your goal lay not to the north, but to the east — the Sammas lay in dreaded Cursewood. You followed the instructions, but there was no Sammas, only horror — the Faceless Thing you met there harries your journey still, as his white-masked monks follow your progress. You came upon a village given over to the worship of demons, you fought the savage beasts and orcs of the mountains, you found a wretched nest of vampires lording over the men of the mountains, and you finally were captured by a circle of black magicians and infernalists.

Your journey, it seemed, was at an end, merely two months after it began. Your guardians were slain. You were the only one left.

They took you to their black tower and kept you caged in that place, apparently planning to steal your essence in some horrific ritual when the time was right. For untold months you stayed caged there — you felt the chill of winter, the bloom of spring, and the heat of summer in that squat, black tower. It was only at summer’s end that rescue came, as a small party of fey knights came to your aid. But the battle turned horrible when a warrior band of humans appeared at the same time, attacking all sides. In the chaos, the Faceless Thing and its masked monks appeared, bringing only death with it. Only your loyal house guard and two of your rescuers, Amasal and Imil’caseti, remain, as they flee with you, far from that accursed place, far to the north. You hope only to find some way to return to the lands to the south — Duchy Jepson, En’amanisrahd, Vonseloth — so that you might try again to find the Sammas, or find another way to save your grove… 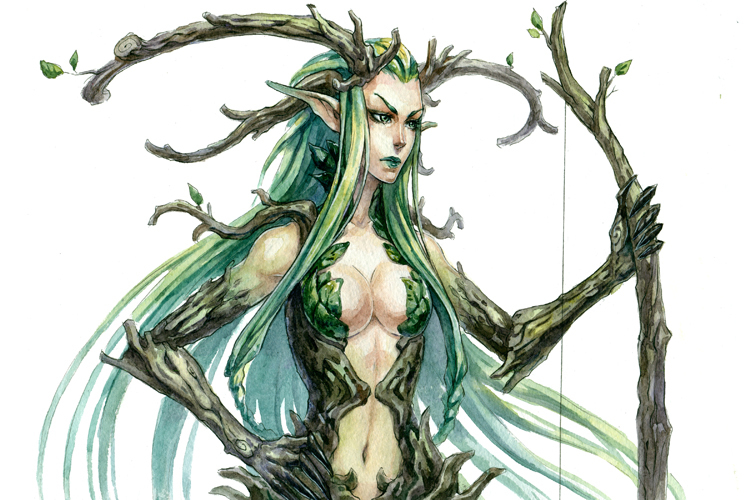