Like Kiris Alkirk, Kiris Hoyt is a member of the Kiris family, former noble family holding regency over the town of Kiris Dahn. When the others fled, for some reason, he remained.

He has been surviving in Kiris Dahn these past eight years, killing goblins when necessary but hiding most of the time.

He is also a wererat, which might have something to do with his exile.

He showed some familiarity with the brass dragon in Kiris Dahn, but when the goblins arrived, he panicked and shifted into his wererat form, attacking the group. When they defeated him, they let him go as he promised to never cross their paths again.

Image retrieved from http://www.wikipaintings.org/en/titian/portrait-of-a-bearded-man on November 15, 2011. 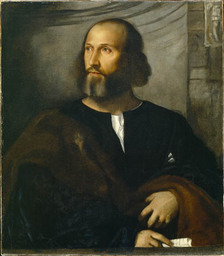