You never knew your family, instead living as a slave — not in the cities of men, but in the lightless tunnels of the fomorian king, King Inmaix. Most of the slaves were eladrin and gnomes poached from the Feywild, but Inmaix evidently saw something special in you. He chose you to be pledged to the powers of forest and cave, and he chose you for the Baleful Ritual of the Evil Eye.

The Baleful Ritual of the Evil Eye is a terrible, torturous rite lasting hours, and involved noxious chemicals and painful surgery. The end result created the bulging, unsightly cat’s eye that rests in your right socket — it has the power to curse, but it marks you as an outcast. King Inmaix also pledged your service to the dark powers of the wild places and the lightless Underdark, marking you as a magician in service to fell entities.

You repaid your “gift” by using your powers to flee your wretched durance, fleeing until you found a traveler. Despite your strange appearance, he aided you and took you to the nearest settlement — a place called Duchy Jepson. The magi of the Wizard’s Tower helped you find your way, but could not help you with freedom from the burdens of the Evil Eye, and freedom from the entities that haunt your dreams and gift you your incredible power.

For that you traveled to the west, to Vonseloth. They said they would help you with your quest if you would aid the eladrin with their own issues, helping their soldiers fight the vicious denizens of the Feywild — like the fomorians. You could think of no better cause to which to pledge your magic.

In this capacity, you were recently contacted by an eladrin noble house to help retrieve a lost noble of the Fey, a hamadryad by the name of Lady Graunwen. After they lost contact, they sent another group, back in the winter. None of the six have returned, so they are sending a second party, hoping summer will be more auspicious.

Your group managed to piece together her trail through the mountains, through doomed Erdovar, through shadowy Ducat Negrescu, and beyond. The travelers tracked her to a squat, black tower, hidden deep in the mountains. The initial strike was successful; although they were potent wizards, the infernalists of the black tower had not a chance. But then a warrior band of humans came — “Knights of Science,” Amasal said, allied against anything magical or strange. The infernalists counted, but so did the Fey. They started attacking all sides.

That’s when the horror came. It was robed, and faceless, and you thought you were going to vomit or pass out. You watched it rip grown men to pieces with little effort.

You don’t remember what happened next; it’s all such a blur. You only know you escaped with Amasal and Lady Graunwen, and you continue to run away from that accursed place…

Image retrieved from http://massiveblack.com/projects/risen-2-dark-waters/ on April 13, 2015. 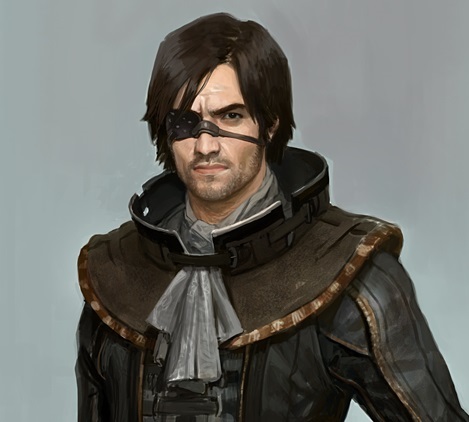