Adeptus of the Wizard's Tower and Keeper of the Vault

Gloomblight Spellweaver is an Adeptus at the University of the Study of the Arcane Arts and Sciences. His general appearance suggests that he is a Shade, and what little is known about him suggests he is a planeswalker, likely from Toril. He is seen by many of the student body as a somewhat malign, creepy presence, but it is evident that he is well trusted by the administrators of the University. Unlike most of the magic-users there, he has minimal teaching duties, only occasionally performing guest lectures on curses and artifacts.

Instead, Adeptus Spellweaver guards the Vault.

Much like Oerth’s Circle of Eight, members of the Wizard’s Council find it expedient to collect and contain dangerous artifacts so that they do not fall into the wrong hands.

This collection is colloquially known as the Vault.

No one knows where the Vault is located (or even if there is only one), although it must assuredly be accessible from the school grounds. It is entirely possible that it is only accessible by magic gate, and exists in its own pocket realm or demiplane.

When not engaging in his Vault duties, whatever they may be, Adeptus Spellweaver also helps maintain the campus grounds, and he has some responsibility for campus security. He is most visible in these roles.

It is also known that the Duchess Jepson is likely the only person who can get away with calling him “Gloomy.”

Image retrieved from http://forgottenrealms.wikia.com/wiki/Hadrhune on January 31, 2012. 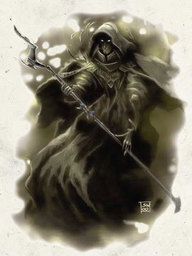