Valna (previously known as Emma by the humans who raised her) is an elf cleric of Pelor. Raised as an acolyte in the Temple of the Guiding Light in Duchy Jepson, Valna was an orphan but always found a family in Abbot Aelius and the rest of the clergy. When she was grown, Valna was given the task of escorting Leogold Spiritforged to his new post as the priest of a small town on the borderlands called Dawnslight. With her new companion, Bosabrieln, she set forth into untamed wilderness.

In Dawnslight, she met with Peren and Torinn, with whom she would form the Shields of the Sorrowfell. 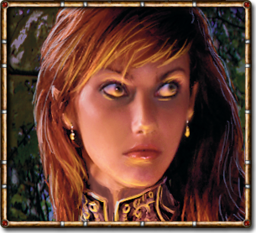