Back in Dawnslight, Treona informed the heroes about a human magician named Dreus Matrand, also known as Demise. This person was seeking an artifact known as the Slaying Stone in the hopes of making more of them.

The heroes retrieved the Slaying Stone, but they tangled with Dreus Matrand’s orc mercenaries. Emma fell in combat, though she was resurrected.

After the heroes arrived in Sorgforge and found Ashurta’s Tomb, they spoke with Professor Nephret and an associate, an elven historian by the name of Lady Dannae Ulyan. A member of the Aereni elf tribe, Lady Dannae shared their interest in death and funerary rites. Following this logic, she knows some information about the Ashen Crown, of which Ashurta’s Blade is a part.

After this meeting, however, Peren is suspicious. The group does a little digging and learns that Lady Dannae Ulyan is also known as Dreus Matrand and Demise. She is Skullborn, a member of a group of necromancers. In addition, she has ties to the Broken Chain.

She has already sent undead after Professor Nephret, who is currently missing. Demise, or a creature masquerading as her, has been slain. The heroes are uncertain of the situation, but they are prepared for anything. Captain Kalaes is also aware of these developments, though the group is unaware of what he plans to do.

After a few more encounters with the Broken Chain, Demise’s master stroke is played: her secret agent, Tikulti, betrays the Wordbearers and escapes with a couple of pieces of the Ashen Crown.

After the group confronted Demise in Ashurta’s Tomb, they captured her and delivered her to the Citadel. She was executed, along with Tikulti, days later. 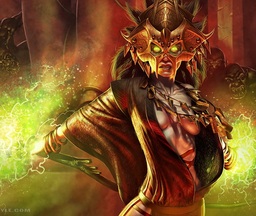