Boasabrieln grew up the only half-breed child of an Elven family in an isolated and heavily xenophobic community, and was the youngest of many siblings. His father had an affair with a human woman, who died in childbirth. Partly out of a sense of duty, partly out of spite, Bosabrieln’s father brought the infant into his home. As Hera to Zeus, his father’s wife didn’t want any part of the child, but as her husband insisted, so the baby stayed. Bosabrieln’s upbringing was not so bad as Cinderella, although mistreatment was prevalent. Ignored by his “mother”, belittled by his siblings, his father was largely indifferent – he’d got in his jab, he’s satisfied, the lad will do what he will.

As he grew up, Bosabrieln was embraced by another in his community, Vianibrar, an artist and former adventurer who took Bosie under his wing, tutored and nurtured him and, in part, encouraged his cynicysm against his family and peers. Theirs was largely a platonic love, though of a physical aspect developed in due course. Vianibrar taught Bosabrieln music and arts, for which Bosabrieln had a natural proclivity, and was encouraged in those gifts. They maintain contact, as much as anyone can in the wide world, even after Bosie (as Vian took to calling him) began his life of adventuring.

When he came of age (or close enough) his family decided enough was enough and it was time for their half-breed to seek his own way. Out in the world, he crashes with various “townie” humans, or sets up camp by himself. He plays music, tells tales and spins magic to pay his way, never saying no, of course, to the odd seduction. As befits one so fair and contrary, Bosie does not discriminate. 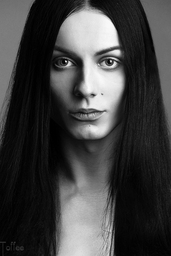