The Baron Lee van Hook is a human wizard and a Discipulus with the University of the Study of the Arcane Arts and Sciences. He is also a wealthy landowner, being a member of Duchy Jepson’s nobility (which, incidentally, places him somewhere in the nebulous line of succession should something, gods forbid, happen to the Duchess).

The Baron Hook (it should technically be the Baron van Hook, but the Baron is an easy-going sort and students took to calling him “Professor Hook,” so it stuck) is a minor magus of some acclaim, but his true area of expertise is botany, herbalism, and the like. He has a significant amount of knowledge regarding common and even rare plants. He also has a strange theory regarding the existence of an entire world of microflora existing all around us. He terms these entities microphytes and widely lectures about them, even if some students consider him a loon.

Baron Hook is suspected to have developed a spell known as Baron van Hook’s Microcosmic Eye to study these entities.

In his research on microphytes, Baron Hook has also encountered entities which he terms macrophytes, which typically behave as microphytes but are visible to the naked eye. Interested parties are directed to examine notes regarding his lectures on the Ordrang and the Molg.

It is also known that he has offered a reward to anyone who can retrieve Nerglid specimens.

Image retrieved from http://en.wikipedia.org/wiki/File:Jan_Verkolje_-_Antonie_van_Leeuwenhoek.jpg on April 3, 2012.

As an aside, interested parties may wish to know more about Baron Lee van Hook’s work. Without further ado: 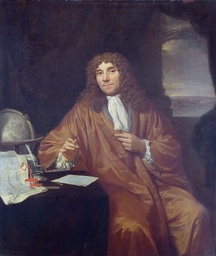