You were trained as a fey knight of the eladrin, a free agent to defend your people in the Feywild and the world. Trained in diplomacy, magic, swordplay, and the dueling style of nevmegil, you have traveled some in your long life, but largely stayed in the cities of Sylernavia (in the Feywild) and Vonseloth (in the world). When the eladrin are threatened, you use diplomacy (when feasible) and force (when diplomacy fails). It is your job to watch for the many threats that may seek them — fomorians, Knights of Science, slavers, spriggans, and the like. Whatever comes, you will end the threat.

You are the carrot and the stick of the high elves.

A fey noble by the name of Lady Graunwen went missing this past winter, and after the first rescue party went missing, you were one of the agents contacted to find her. You and a band of knights and magicians went into the Hoarfrost Ridge, following her trail.

Past Duchy Jepson, she went through doomed Erdovar, through shadowy Ducat Negrescu, and beyond. Her trail ended at a squat, black tower, buried deep in the mountains. A battle plan was decided, and the tower infiltrated. Her jailers were potent sorcerers — devil-worshipers, by the style of their magic — but your military band was better trained, and better-trained. Victory was certain.

And then the others came; a human warband attacked just after your own warband. You recognized their organization and the banner they carried — the Knights of Science, no doubt having traveled from their hidden monastery in the mountains. The human warriors with them are well-trained soldiers, and the clerics and squires are equally skilled in their respective fields, but the commanders — they are the true Knights, humans poised against the dark of the world. Their fanaticism is legendary, allowing them to resist temptation — but it also blinds them, for they resist all things arcane. The infernalists were no doubt their original quarry, but a cadre of elves and wizards are considered just as heretical as anyone else. They attacked both sides of the conflict with superior numbers.

It was as Lady Graunwen was freed from her cell that the true horror came, the Faceless Thing. A group of masked monks appeared just as it appeared in the middle of battle. It barely seemed to move, but men died before it. You watched a man, filled with fear, fall before it, coughing as it ripped him apart with its tentacles. It caught sight of you with that eyeless face, and flickered across the battlefield to engage you. You stabbed it, saw that it could bleed —

The next thing you recall was running. You had apparently escaped with Lady Graunwen and the warlock Imil’caseti. You don’t remember what happened, but you just know that the battle was apparently lost, and retreat was the only option. The group is running deeper into the mountains, hoping to find some manner of civilization…

Image retrieved from http://l5r.wikia.com/wiki/Kakita_Matabei on April 13, 2015. 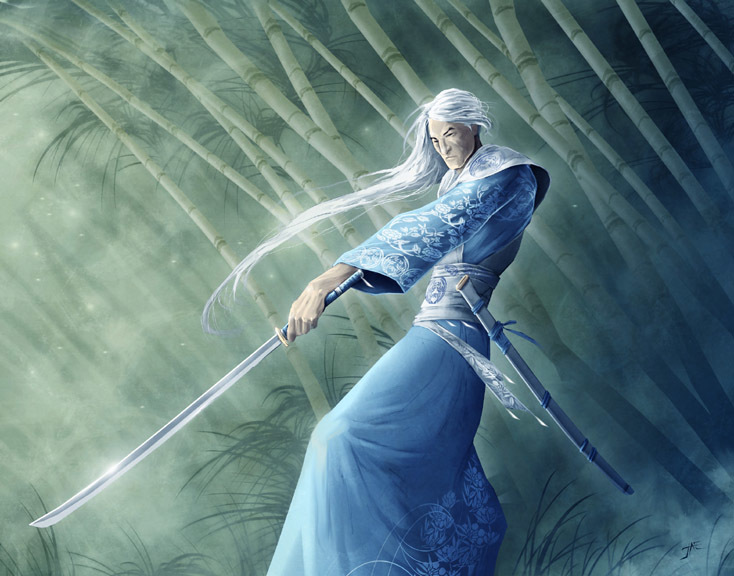